In the wake of a horrific hate crime that occurred on Sunday, Muslims in Canada are speaking out on the fear of anti-Muslim hate and violence they endure in their communities on a daily basis.

“The recent attacks are devastating, outrageous, and shocking, to say the least,” said Fatema Abdalla, communications coordinator for the National Council of Canadian Muslims (NCCM). “This isn’t the first time the Canadian Muslim community is experiencing such a devastating attack — we’ve been here before.”

Four members of a Muslim family were killed on Sunday in what Prime Minister Justin Trudeau referred to as a “terrorist attack motivated by hatred.” The family was out for an evening walk in their hometown of London, Ontario when a man in a black truck intentionally mounted the curb and mowed them down.

The vicious attack claimed the lives of Salman and Madiha Afzaal, their 15 year-old daughter Yumna, and the children’s grandmother, Talat. Their 9-year-old son was seriously injured and remains in the hospital.This content is not available due to your privacy preferences.Update your settings here to see it.

Police have said that the driver planned the attack as a targeted crime against the Muslim family. He has been charged with four counts of murder and one count of attempted murder.

Abdalla told Yahoo News that for the grief-stricken Muslim community, feelings of sorrow and danger are now familiar. “We’ve all felt the same sense of shock, and subtle numbness, before,” she said. “We felt this very recently, with the IMO attack, where brother Mohamed Aslim Zafis was killed right in front of the mosque in Toronto. We’ve been here with the Quebec City mosque shooting, and very recently, with the fourteen reported attacks on our Alberta Muslim women.”

Trudeau acknowledged that this hate crime was “not an isolated event” in the House of Commons on Tuesday. In his statement, he mentioned the 2017 Quebec mosque shooting, the 2020 fatal stabbing of Mohamed Aslim Zafis, and the violent attacks against Black Muslim women in Edmonton this year.This content is not available due to your privacy preferences.Update your settings here to see it.

However, Abdalla said that Canadian Muslims are waiting for political figures to move beyond statements.

“We’ve heard the condemnations, we’ve had the prime minister already designate a day against Islamophobia, which is all great — and it is a step towards the right direction,” she said. “However, the continuation of these attacks calls for an urgent need for more action.”

The recurrence of these crimes, Abdalla says, is why the NCCM is calling for a “cross-governmental level national summit on Islamophobia,” in order to “come up with real, tangible actions that can combat Islamophobia, street harassment, and the dismantling of the many white supremacist organizations that still exist and infiltrate our country.”This content is not available due to your privacy preferences.Update your settings here to see it.

What it feels like to be Muslim in Canada 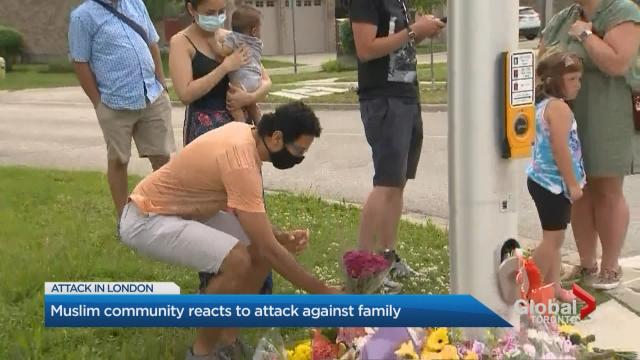 Muslim community reacts to attack against family in London, Ont.

The Muslim community is reacting to an attack in London, Ont., on Sunday that left four family members dead and a young boy in hospital. Farah Nasser reports.

Many Muslims across Canada are expressing the fear they experience on a daily basis, something this event has only highlighted.

Hassam Munir, public relations manager at the Yaqeen Institute for Islamic Research, says that the London, Ont. attack is a “painful reminder.”

Even when I might feel safe, I’m not,” says Munir, who is pursuing a Master’s degree in history at the University of Toronto. At any given moment I, my family, and people who share my faith are potentially at risk of being violently attacked by someone harbouring anti-Muslim hatred and bigotry.”Hassam Munir, PR manager at Yaqeen Institute for Islamic Research

“Because of this, you just learn to ensure your own safety by walking on the inside of the sidewalk, being aware of the closest exits and never standing too close to the yellow subway line. It doesn’t even feel like a conscious effort, it’s second nature.”

This sensation of constant hypervigilance is something many Muslims have reiterated.This content is not available due to your privacy preferences.Update your settings here to see it.

“When I’m walking in the streets of downtown or a neighbourhood I’m not familiar with, I feel tense and have to constantly look over my shoulder to see if anyone is watching me or if anyone is behind me,” said Maleehah Muhammad, a high school student in Ontario.

Muhammad said she often finds herself tensing up when an unfamiliar car passes. When she plans to go out, she always makes sure she has at least one friend or family member to accompany her.

“I shouldn’t have to feel this way, as someone who was born in Toronto and grew up here my whole life,” she said. “Feeling like this shouldn’t be normal in my own home, but this is the same for many Canadian Muslims.”

This attack and other anti-Muslim hate crimes have forced many Muslims to re-examine or reconsider basic aspects of their life, such as their appearance.

“My love for the hijab and my confidence wearing it hasn’t changed, but now I fear how being visibly Muslim in Canada might put my life in danger, God forbid,” said Duha Muhammad, a Toronto student. “I still want to keep it on. I just have to be aware of what that means.”

Munir echoed this feeling: “I am always mindful of the way my beard looks. I love growing it out and keeping it long and thick, but I do feel a kind of sense of relief and safety when I’m trimming it, and very clearly, so do my parents.”

Even on special occasions like Ramadan or Eid, he feels an extra level of concern. “When I’m dressed in traditional clothing, I find myself instinctively avoiding crowds and limiting interactions with strangers.”

Anti-Islamophobia work ‘should have started a long time ago’ 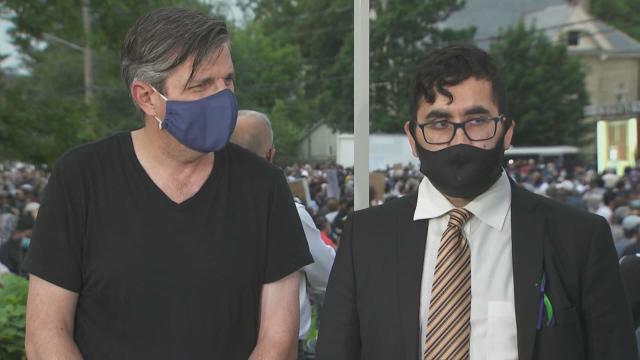 The realities of anti-Islamic hate in Canada

A conversation on the realities of anti-Islamic hate in Canada with Jeff Bennett, a former PC Party candidate who wrote an online letter about the racism and bigotry he witnessed in London, Ont., and Mustafa Farooq of the National Council of Canadian Muslims.

In the wake of this tragedy, Muslims in Canada are calling for the government and society at large to reckon with systemic issues of racism, white supremacy, and Islamophobia.

“Violence does not just randomly occur in a vacuum,” said Munir. “I hope every Canadian is taking a moment for sincere self-reflection right now. We all condemn violence, but we also need to question the ways we view those different from ourselves.”

He added that condolences and condemnations need to be accompanied by “a firm long-term commitment to eradicate the roots of bigotry and racism in our society.”

“Canada has a lot of work to do that should have started a long time ago,” said Azzam. It starts with condemning the London attack, they said, but needs to go deeper. A brief history of previous Palestine peace deals – and their failure