..Urged Citizens To Save The Country From Collapse Renown Islamic cleric, Sheikh Abubakar Gumi has said that the nation may not survive if it is governed by a regional or sectional leader in 2023, unless Nigerians enthrone a President that will be acceptable to all. Although Gumi did not mention the well controversial Muslim Muslim… 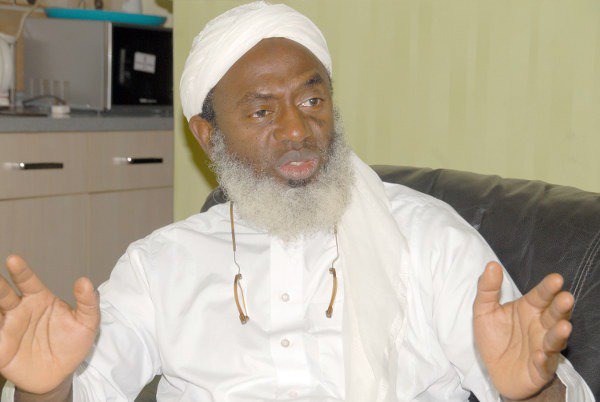 ..Urged Citizens To Save The Country From Collapse

Renown Islamic cleric, Sheikh Abubakar Gumi has said that the nation may not survive if it is governed by a regional or sectional leader in 2023, unless Nigerians enthrone a President that will be acceptable to all.

Although Gumi did not mention the well controversial Muslim Muslim ticket in the statement he released yesterday night, but rather warned Nigerians vehemently to save the nation by electing the leadership with national appeal that would save the country from the present woes.

He said that it is unfortunate, “the next president is going to meet a great mess”, pointing out that ” In a metaphorical sense, the nation is suffering from three main disabling diseases; they are Leprosy, Diabetes, and HIV AIDs, all in one body”.

According to him, “the next president needs to be intelligent and supported by men with acumen not the ‘garagara’ person with an impulsive temperament that is after the praise of sentimental citizens. He has to act quickly and carefully. He has to center his efforts and concentration inwards not outside. I know a lot of our problems have roots in foreign interests, yet local problems must be solved locally.”

“The president has to be careful of the dishonest clergy. Like mosquitoes, they feed on every system without adding any values except polarizing the nation more on the religious divide. I cannot imagine a nation facing insurgencies left, right, and center, yet the clergy would fold their arms without intermediating to see for conflict resolutions. Rather they are busy fueling religious polarization.”

Gumi remarked, “if the next president also follows the same trajectory thinking that the present government was only dealing with the criminals with kid-glove, then a greater insurgency will definitely ensue. It’s taking almost twelve years to fight Boko Haram in the North East, with their leader only killed during a factional fight, not by our military action. And now, many BH are fortunately surrendering as a result of the genuine efforts of reconciliation and rehabilitation by the federal and state government as demonstrated by action, not rhetoric. This unfortunately is irking some especially the elites as cajoling criminals. To them, anything short of annihilating them is no solution”.

“Comparing them to IPOB who are non-repentant and not ready for reconciliation is disingenuous. Yet politicians have to deal with that. The economy is in such disarray that needs a true nationalist that will institute measures even if they are against these ‘fake’ corporate bodies that are Dracula sucking the blood out of the nation. Not the kind of ineffective but detrimental measures we experience in the past, but well-studied economic measures that will not only increase the GPD but raise the per capita income of the individuals. Today in Nigeria, the middle-class income strata are almost effaced. You are either poor or extremely rich.”

“As for security, there is a need for a general overhaul to reflect the security challenges the nation is facing.

The nation needs state and county police, and a national guard with forest rangers also drawn largely from the dwellers of the forest. No Nigerian should be marginalized in development and participation in nation-building”.

“The Nation needs a robust educational reform. No child should be left behind. In a ten-year generation, must Nigerians should be educated somehow and the nation will then rise to great heights. Without education all said will go with the wind. The next president is not going to face problems that are for a novice nor can the nation wait for him to learn any longer. He should be ready from day one and like a sprinter ready for action with the blow of the whistle. ”

“Nigeria cannot be ruled effectively by a sectional or regional politician but one that has the national appeal of carrying all along. May Allah heal our nation from bad leadership and communal clashes. Amin”, Gumi added

A New World You Can Visit Just By Thinking: Remembering Allah and His Names