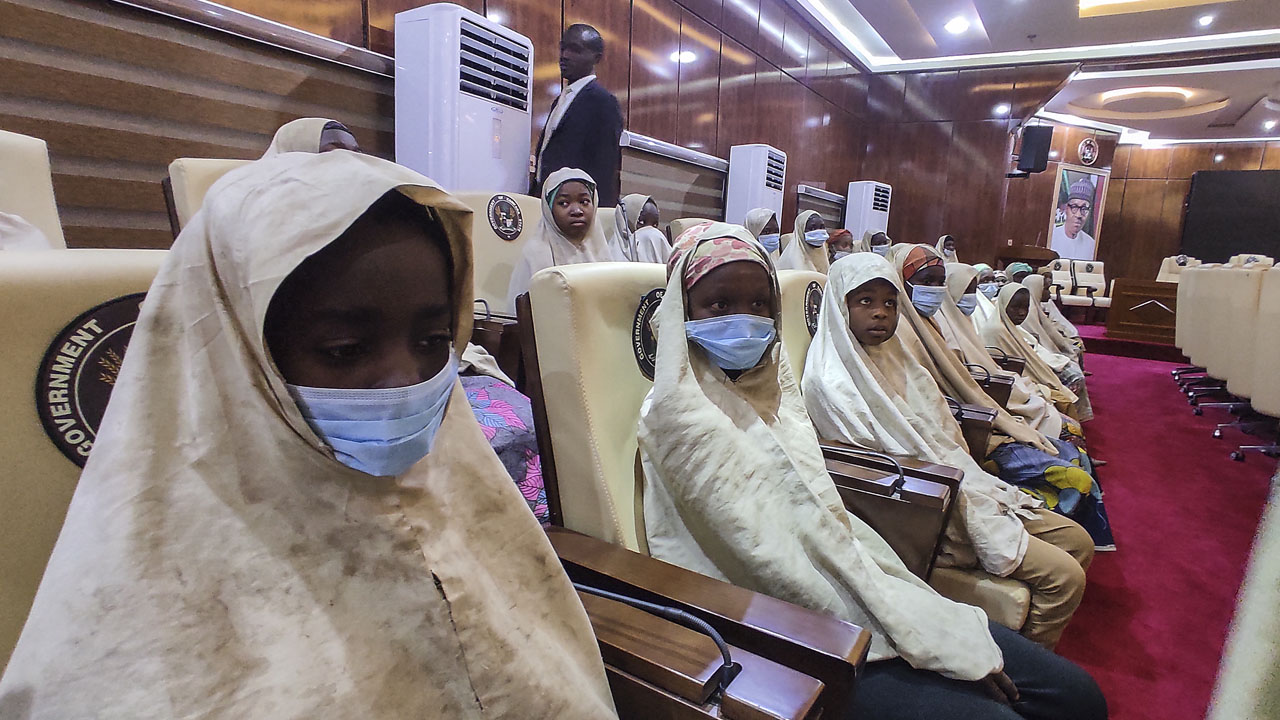 A group of girls previously kidnapped from their boarding school in northern Nigeria arrive on March 2, 2021, at the Government House in Gusau, Zamfara State upon their release. – All 279 girls kidnapped from their boarding school in northern Nigeria have been released and are on government premises. Nigeria has been rocked by four mass abductions of students in less than three months, by criminal groups. Gunmen from cattle rustling and kidnapping-for-ransom gangs on February 26, 2021, invaded the Government Girls Secondary School in remote Jangebe village, whisking the girls away from their hostel. (Photo by Aminu ABUBAKAR / AFP)

All the 279 Nigerian schoolgirls released by kidnappers this week will reunite with their parents later on Wednesday, a senior state education official told AFP.

The girls, pupils at Government Secondary School in the remote village of Jangebe in northeastern Zamfara state, were abducted on Friday from their hostels by gunmen known locally as bandits, who released them early Tuesday.

Since their release, the students have been in government care in state capital Gusau, where they are receiving medical treatment following their ordeal in captivity.

“We are taking the girls back to the school in Jangebe this afternoon, where they will be handed over to their parents in the school premises,” Zamfara state education commissioner Ibrahim Abdullahi told AFP.

“We feel it is safer and easier for parents to pick their children in the school rather than to come to Gusau to claim their wards,” he said.

Medical checks had shown the girls were all fit to return to their families, Abdullahi added.

One of the girls, Hafsat Umar Anka, on Tuesday recalled harrowing experiences during their abduction.

“We trekked all the way,” she said, speaking in Hausa.

“Some of us developed sore feet while others could not walk and had to be carried on the back by some of us.”

“They threatened to kill anyone of us who refused to stay. We were very cautious. They fed us adequately.”

She added: “We were put in a wide ditch littered with faeces and we were made to sleep there.”

UN experts on Wednesday called for urgent rehabilitation of the traumatised students.

“Social inclusion of these children requires the provision of long-term measures aimed at restoring their physical and psychological well-being,” the UN Human Rights Special Procedures experts said in a statement.

“Sensitising families and communities to the importance of reintegration is imperative for them to be able to build renewed social relations… and to overcome stigma.”

The experts condemned the Nigerian government for the “lack of an effective investigation into the abduction of 344 students from a boys’ boarding school in Kankara, Katsina State, in December 2020 and released a few days later.”

Heavily-armed criminal gangs in northwest and central Nigeria have stepped up attacks in recent years, kidnapping for ransom, raping and pillaging.